Car’s AC Not Cold? Here Are 4 At-Home Checks You Can Do [Video] 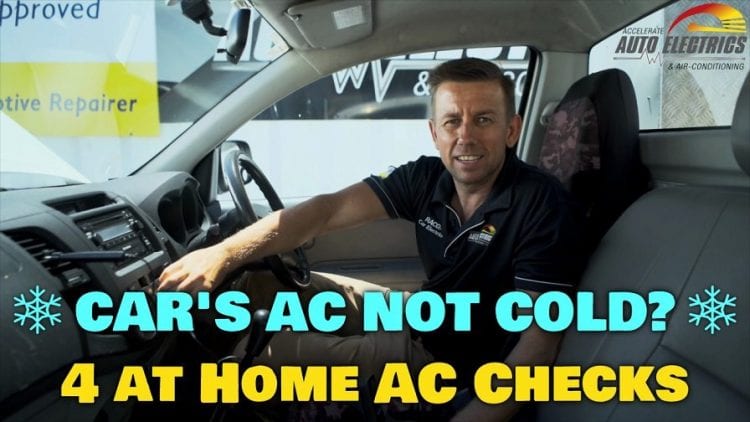 So your car’s AC not cold? Here are four things you can check at home.

I’m Andrew from Accelerate Auto Electrics and Air Conditioning. It’s starting to heat up outside and soon you’ll be reaching for the AC to keep you cool in the car. To prepare for the warmer weather, we recommend running through a few simple checks to make sure your air conditioning is summer-ready.

First, you want to check for any unusual noises. On most cars, when you turn the air conditioning on, you should hear a loud click. That’s the noise of air compressor cutting in. If you hear a rumbly sound once your compressor cuts in, this means it’s on it’s probably on its way out and you might need a replacement.

The other noise that you can hear is the hissing noise when it cuts in and out behind your dash as the gas flows through. This is a sign you’re low on gas. The other thing you might get is your vent temperature won’t be as good as it should be. This may also show up as a difference in temperature between the two vents.

Second, you want to check for any unusual smells. If there is a musty or unpleasant smell coming out of the vents or your allergy symptoms are being triggered when the air conditioning gets switched on, there may be a bacterial or mildew buildup in the system.

An unusual smell may also be a sign that your evaporator is leaking gas in the car. That’s definitely a more serious issue. The other thing you’ll notice if your evaporator’s leaking is the air conditioning will be low on gas. So it won’t be as cold as it should be and will have that uneven vent temperature.

So thirdly, and probably the easiest to do at home, and the most accurate, is the performance test. What we’ve done here is we’ve put a thermometer in the vent. You can just use any old thermometer. We’ve set the fan to first or second speed and we’ve also got it on recirculate. That’s quite important.

What we should see is a temperature of below eight degrees. The temperature will fluctuate as the compressor cuts in and out. This is a natural part of the air conditioning system. What it will do is the compressor gets colder and colder and colder, then as it gets down to a freezing point, it will say 6 degrees to 5.5 degrees out here at the vents. The compressor will then cut out, the temperature will rise to about seven or eight degrees, and then it will cut back in and the cycle will continue. The process is called cycling.

The air conditioning system does this so that the evaporator doesn’t freeze up inside the car. If you see a temperature going below five degrees, that is a sign that something’s wrong. It’s either gonna be faulty thermostat or thermistor, or more commonly, a blocked cabin filter. A blocked cabin filter will restrict the air flow to the vent so it will allow the evaporator to get too cold and freeze up to a block of ice. If you’re quite handy yourself, you can get to the cabin filter and you can check it and replace it yourself.

4. Check for a Pool of Water

Fourth on the list, have you ever noticed the pool of water under your car after you’ve driven it with the air conditioning on? This is normal for most cars.  The air conditioning system is designed to drain the condensation to the exterior of the car. If you’ve driven for a long time, you pull up, it will make a pool of water. The amount of water it discharges at the bottom actually depends on the humidity of the day, and what setting you’ve got your air conditioning on. So don’t stress too much about how big the pool is, you just want to see it on the outside of the car.

One thing to look for is if the air con’s cold, it’s a humid day, and you’re not having water on the ground outside of your car, maybe just check the passenger floor of your car. Sometimes the drain tube can block up, the water can leak into the car. Obviously, as a result, you end up with mouldy, stinky carpet.

After completing these four checks, if you suspect your car had a gas leak, take it to a licenced auto technician to get it checked out. Here at Accelerate Auto Electrics, we have a team of licenced technicians who can diagnose and repair all types of air conditioning problems.