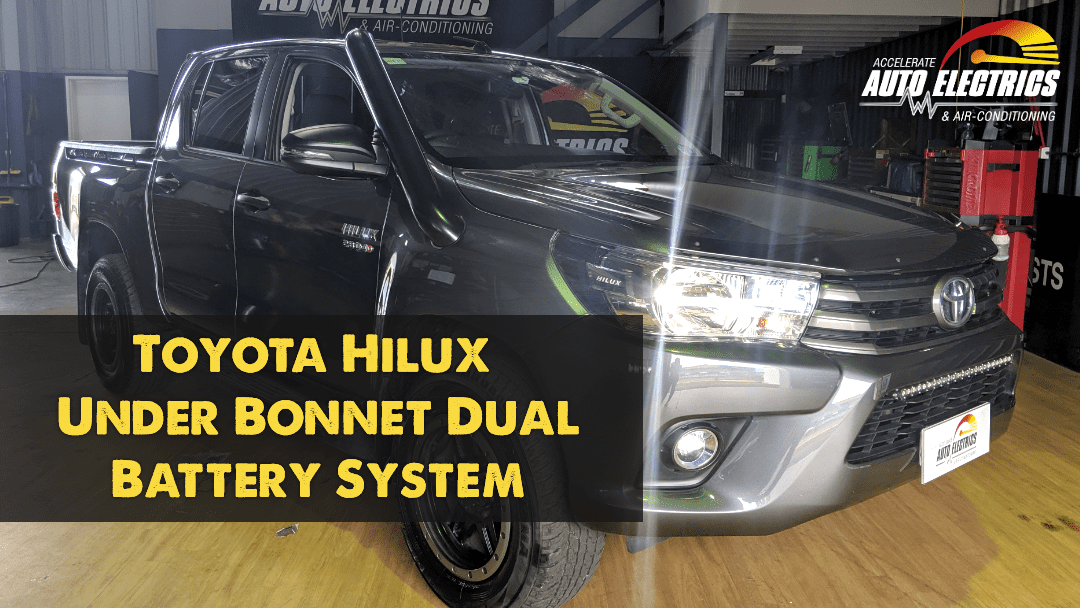 One of the questions we get asked a lot is where should I put my dual battery or my auxiliary battery? Should it go under the bonnet or in a box in the back?

This is actually Josh’s Toyota Hilux. We’re here looking at it and he’s put his under the bonnet. We’re gonna let him tell us why he thinks it’s better under the bonnet, in his vehicle. Take it away Josh.

Josh: So, I went under the bonnet mainly to save space in my tub. A lot of the battery boxes are big and bulky and take up a lot of room.

The Toyota Hilux’s are good for that because you can get an under bonnet battery tray that still fits nice and tidy out of the way. You can get a 105 amp hour battery under the bonnet. This is ample to run your fridges and accessories for a couple of days. In conjunction with that, with the Toyota Hilux’s, you have to use a DCDC charger.

I have used the Redarc BCDC1225D, which is solar capable, and also maintains my battery to a hundred percent. A lot of these new cars have computer controlled alternators and smart alternators, so they need a correct charging profile. Otherwise your battery will never charge correctly and the computers don’t agree with it.

Andrew: So, how many days do you get outta your fridge Josh?

Josh: I get about three days without solar, before I have to start my vehicle and run and charge my battery back up.

Andrew:  Good, and what size solar panel have you got?

Josh: I use a 120 watt portable, little solar panel that I throw out in the sun. That way I can keep my car parked in the shade.

Andrew: Okay, cool. Anything else you’ve put on it for us, just quickly?

Josh: So, I’ve done LED upgrades in my headlights. I’ve got a slim line light bar mounted in my grill, because I haven’t got to the point where I want a bull bar.  I quite like the look of the slim factory body lines. I’ve got built in work lights in the back, that again run off my auxiliary battery. I also run my UHF and all that, which is all inside the cab as well.

Andrew: So any regrets putting it under the bonnet?

Josh: No, I don’t regret putting it under the bonnet. Mainly because, if it’s possible to go under the bonnet, I think it’s the best, most easiest way to do a dual battery system. As yeah, you save a lot of space.

Andrew: What we’ll do is we’ll take you inside and will give you a quick look at Josh’s dash. He’s used the factory switches that we use on our light bars and so on, so you can get a good look at that.

Josh: So inside my cab, I run the factory fit Toyota style blanks, so they replace the factory blanks. In this one here, I have a voltmeter and USB, which runs off my second battery to keep all my devices and phones, and tablets charged on the move.

Next to it I run the factory fit UHF plug. In a lot of these vehicles there is nowhere to mount the hand pieces. I didn’t wanna drill holes all through my dash to mount a hand piece. So I run the Uniden unit with all the controls and speaker, built into the hand piece. And when I don’t want it in use, I can just unplug that and put it away in my glove box. That way I don’t have cables and things dangling all over the place.

On the driver side of my vehicle I have the factory fit Toyota switches, that runs my auxiliary work lights, my fog lights, and my driving lights on the front. Now, we’re gonna go to the back and I’ll show you my work lights and the set up I have in my tray.

In The Ute Tub

So in the back of my Ute, I run just an Anderson plug in the side, which mainly runs my fridge. If I need to when I’m out camping, I then plug in a junction box. On this I run another voltmeter, some USB Chargers, and some cig sockets to run camp lights and stuff like that.

Also, I have my UHF aerial mounted in the back here. It’s a 6.5 DBI Uniden aerial. Once again, I didn’t have a bull bar, so I found an alternative place to mount it, and it’s quite tidy in the back.

At the top I run two LED work lights. These mostly come in use when I’m backing my boat down the boat ramps at night. Just to give me a bit more light and also when I’m camping, to find those campsites.

Andrew: So that was a quick run through of Josh’s Toyota Hilux, with his under bonnet dual battery system and a few other mods he’s done. If you have any questions give us a call on 1300 227 353 Email us at [email protected] or feel free to comment below.