Why Your AC System Doesn’t Just Need a ‘Top Up’

“The AC system just needs a top-up” or “Can’t you just top-up the gas?” These are just a couple of common phrases we regularly hear when it comes to AC Services. We’re here to explain why your AC system doesn’t just need a ‘top-up’.

The air conditioning system in your vehicle is a fully sealed system. So in theory, if all the components, hoses and seals are functioning properly then the refrigerant should remain in the system indefinitely. However, as with most parts of your car, the AC system is subject to wear and tear over time. Seals and valves can break down from prolonged exposure to the heat and the elements. If a vehicle has come into our workshop that is low on refrigerant, chances are there is a leak in the system somewhere.

So why can’t we just top up the gas when it has leaked out?

The refrigerant that is inside a car’s air conditioning system is known as R134A. R134A is an ozone-depleting substance and synthetic greenhouse gas, and if released in the atmosphere, it can damage the ozone layer and have a negative impact on the environment. Due to the potentially damaging effects of R134A, there are strict handling, usage and storage regulations that we must adhere to.

As ARCTick licenced technicians, if a leak or faulty part has been identified in the system, we can not and will not regas the system until it is repaired. To do regas a leaking system would be knowingly releasing R134A into the atmosphere and would be a breach of our ARCTick licencing.

How do we identify a leak?

As part of our ARCTick licencing, we must visually fully inspect and pressure test all AC systems before regassing. One of the ways to assist this process do this is to add UV dye when regassing the air con system. If there is a leak in the system, as the refrigerant evaporates away, the oil dye mixture leaks into the engine bay and leaves a traceable stain. Shining an ultraviolet light near the various components will show where the leak is.

What’s the best way to prevent damage that could lead to costly repairs?

Get your AC Serviced regularly!

What do we do during an AC service?

Contrary to what many people believe, there is much more involved in an AC service than just a simple regas, or top-up. During our air conditioning service, and before we regas the system,  we complete the following: 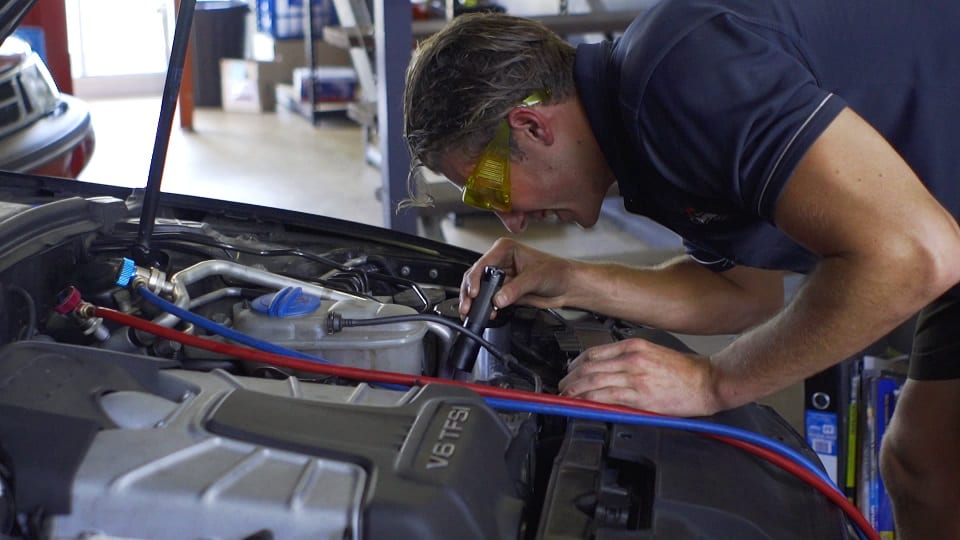 In addition to the standard air conditioning service, we can also provide replacement carbon filters and antibacterial treatments.

How often should I get my air-con serviced?

We recommend getting your air-con system serviced every two years. Over time, things like moisture, dust, debris, pet hair and bacteria build up in the various components in your air conditioning system.

If left unchecked, these buildups can cause damage to major components and result in costly replacement or repairs. With regular maintenance, these components can be inspected and any potential issues can be identified at an early stage.

Has it been over 2 years since your last AC Service?