Hi guys, Andrew here from Accelerate Auto Electrics and Air Conditioning. So here we are, we’ve got a 2020 BT50, and we’ve just done a heap of work to it. The customer’s actually done his own research and given us a list of the products he wanted. And to be honest, he’s come up with a pretty cool thing here.

So what we’ve done is we’ve fitted the FYRLYT, these are LUXSIS 5000s, so these are actually a halogen light. Do some research, you’ll find they’re pretty amazing. The advantage of them is they don’t get that reflection off the street signs like you get when you’re going along, blasting along country roads at night and so on.

So they give solid 500 metres but with the true colour and not like the white light of the LEDs, and you also don’t get that bright reflection that sorta ruins your eyes when you’re going backwards and forwards at night especially once you get over 40, you’ll find that big signs, lots of reflection, it can take your eyes a little while to equalise.

So he’s fitted them for country roads and then when he goes off-road, so in the bush, up the beach, big boy here. So this is the Xray Vision Quad-optic light bar. These things are amazing, they’re a flood, they’re a spot, and pretty much we call them the day maker cause you flick this on and it’s daylight, it’s pretty much the sun on your light bar ready to go, on your bull bar ready to go. The other thing you’ll notice is the GME UHF antenna, we’ll show you what we’ve done inside there. But yeah, so this is flood and spot, and this is a solid 500 metre spot, so off-road, country streets.

We’ll walk around, we’ll meet inside.

All right, so we touched on the UHF, what we’ve done is we’ve fitted the UHF, it’s the TX4500, we’ve fitted that to this beautiful Department of Interior roof console. We haven’t mounted the handpiece yet, we’ll wait for the customer to show up and we’ll work out where we’re gonna stick that. That’s why it’s dangling down a bit, we’ll probably mount it round the back or something to pull it a bit tighter and so it’s not so annoying.

And yeah, there’s plenty of light, two interior lights, these are a beautiful bit of gear. And then there are just the switches inside for the spotlights, probably not much to show there but definitely a great bit of gear. 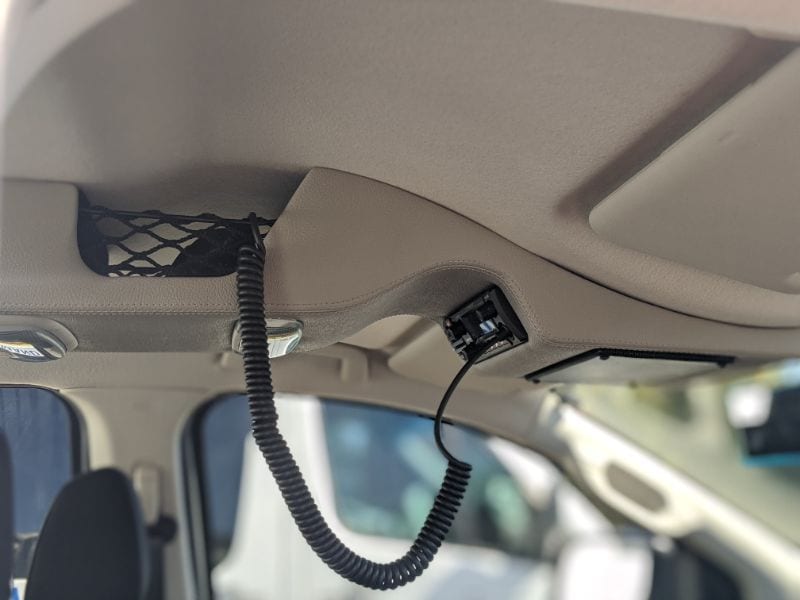 The next bit is behind the seat. Moving down the vehicle. So what we’ve done here is our custom behind-seat dual battery solution. So we do these for the Rangers, the BT-50s and the Tritons. We’ve done heaps of them now, well over a hundred. This one, he’s gone for our 108 Lead Crystal battery option and it’s also paired up with the REDARC BCDC1240D. We’ve given him a cigarette, ah sorry, not a cigarette, a fuse box here, we’ve labelled it. He’s still got a couple of spares moving forward.

At the end of the video, we’ll post some close ups of the, of photos that you’ll be able to flick through and they’ll also be the ones you’ll probably see on Instagram and so on. So you can have close ups, this way we can run through the video, not have to edit it too much and at the end of it, you can check out the photos. It also keeps you there till the end. So yeah, done over a hundred of these, they’re great. Once this video’s done, we’ll whack the back seat in, it’ll never know it’s there, and dual battery solution.

So down the back, we’ve run a couple of sockets for his fridge up on the headboard and we’ve also installed four Black Tip floodlights. So we got two up on the headboard, two down here on the tow bar. They’re all pointing out, we’ll move them around once he tries it out. So they’re amazing, the Black Tips.

Really high-end floodlight, look great too. They’re part of the Great White range. Probably the other thing to show is just we’ve done the Anderson plug, your standard Anderson plug and there’s a break controller tucked away in there as well. 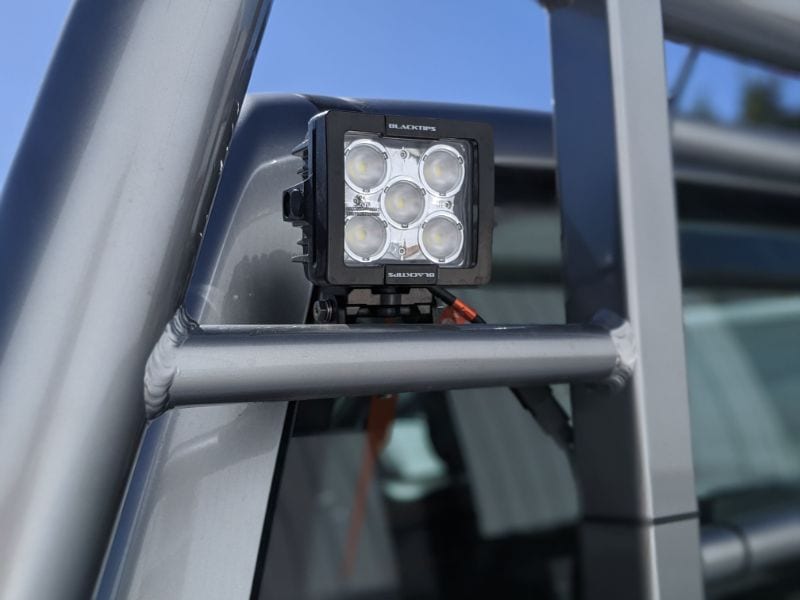 So yeah, that’s pretty much the run through of this one. If you’ve got any questions or comments on this job, please click the link below or give us a call or shoot us an email, info@amae.net.au. And now we’ll just run through some photos that you’ll be able to check out. And yeah, thanks for watching our BT50 Fitout.