Do you want to ditch the powered campsites and embrace the free camping lifestyle?

Come inside and check out this caravan and we’ll show you how upgrading to lithium gives you the freedom to adventure just about anywhere.

Hey guys, Briohny and Andrew here from Accelerate. So we’re inside a TrackVan by Eden and we’ve just done the lithium upgrade.

So, Andrew, what did we start within this van?

B: And what issue did the customer come to us having and why did they want a lithium upgrade?

A: So we’ve fitted a 200 Amp B-TEC Enerdrive Lithium battery down under Briohny and there is capability for a second one.

B: So what have we done to get them ready for free camping? Let’s start with the solar panels on the roof.

A: Okay, so the main thing really that’s made this off-grid ready is the extra two panels. So, now we’ve got a total of 600 Watts of solar on the roof. That, at the moment, I think it’s only 10 o’clock in the morning. It is a sunny day, but we’re making 20 Amps. So at 10 in the morning, 20 amps, happy days that we’ll keep charging all-day and keep in front of this big fridge.

B: So where’s the solar feeding into?

A: So the van originally had a voltage 30 Amp MPPT, which it’s still got, and we’ve utilised that to keep the cost down and it’ll do the job.

B: What else have we put in here from Enerdrive that’s behind us?

A: So, we’ve done the Enerdrive DCDC charger, and we’re just using that as a DCDC. So that way we can blend while we’re driving, we can use alternator from the vehicle and also solar. And then we’ve fitted a two 40 volt charger for whenever it does need to top up.

B: So we have still got the [BMPRO] Genius System in here, What is that doing now?

A: So, the Genius System really now is just fusing and a junction. So it’s just operating as a giant fusebox. And, what else is it doing? That’s pretty much it, to be honest. So the van was wired with a Genius, means everything junctions there. So it’s easier to leave it in and just disconnect the actual charging ability of it and, and just use it as a giant fuse box really.

B: So that’s pretty much it, it has been a really simple upgrade for these guys here, and with 600 Watts of solar on the roof, and a 200 Amp power lithium battery, they should be good to go free camping for as long as they want, really, as long as the sun’s shining. So the other good feature of the Enerdrive battery is it has a little bit of technology with it. What is it, Andrew?

A: Yeah. So here, we’ve got the app, that obviously Bluetooth’s to the battery. And what that’s showing me is at the moment, with the fridge running and, everything else we’ve run and we’ve got some lights going for filming. We’re still making 17.3 Amps. So we’re, we’re showing, what are we showing? We’re showing 20 Amps on the solar controller. So we’re basically using four to keep it simple. So as we run all day with everything going, we are still charging 17 amps. So, we’re killing it.

B: As you can see, this is a really straightforward upgrade to get these guys free camping endlessly, as long as the sun is shining. As always, if you have any questions, comment below. 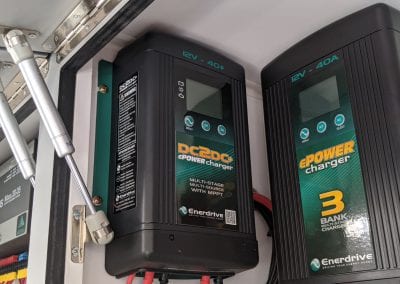 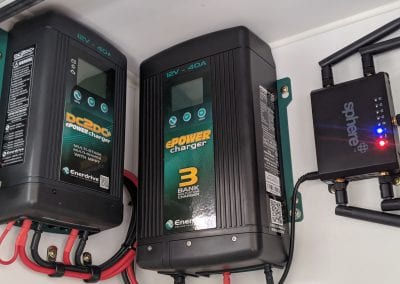 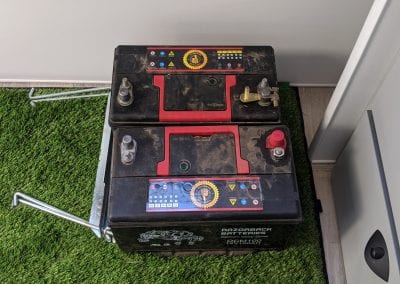