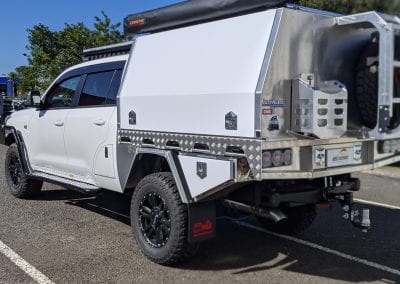 Come check out what we’ve done in the back of this Chopped 200 with an Enerdrive Lithium. Hey guys, Andrew here from Accelerate just gonna run you through an epic canopy build we’ve just finished off.

So, this here we’ve got a Chopped 200 it’s been chopped by Creative Conversions and then it went to Norweld to get the tray all the fridge slide fitted, all the rest of it. It went to TJM, got all that stuff, all the bar work and everything is done, roof rack and then it’s come to us to get the canopy fit-out.

Oh sorry, and it also went to Just Autos and now it’s got some serious power and really sweet exhaust. So, then we got it to fit out the canopy. Now, the customer has pretty much given us a layout of what they wanted and we’ve just followed that. So, yep, this is a pretty well-worn travel path but we’ll check it out.

So, the girls have made me get up in here to give you the rundown on everything that’s going on. So, let’s do some stretching. So, that’s just the USB and cigarette socket obviously for charging phones stuff like that. Everything here is pretty much wired to the Enerdrive BTech so, all of this is auxiliary power.

So, obviously, we can draw as much as we want off it and the vehicle will still start. So, run through that’s just accessory sockets. The next thing is the Enerdrive gauge, that’s an ePro. So, that tells us everything that’s going on in the battery. That’ll give us a constant read out percentage.

You can actually go through and program it to shut things down. But the main thing it does is power in, power out and just gives us an indication of the percentage left. I should mention this battery also is a Bluetooth battery. So, it’ll also give you a full readout on your phone displaying from the battery.

The next thing, this Enerdrive green thing here. That is our inverter on and off. So, if we want to turn the inverter on she’s on. So, basically, now we’ve got 240V power down at the GPO and that’s coming from Btech battery via this inverter behind me. 2000W inverter so that’ll run pretty much anything you can throw at it, microwaves inductive cooktops and so on. It’s just a fridge output and that’s a spare. I dunno what for just in case he wants to plug something else in. So, that’s two there.

These here are manual reset circuit breakers. So, we’ve fitted these pretty much everything in and out. The beauty of these is number one if you have a problem and it trips you can just reset it and number two, if you do want to isolate a circuit at any time you can literally just flick it and it’s turned off. So, it’s more like a house style circuit breaker. So, it makes, oh I’m probably upsetting something there, so, it makes the system a lot easier to deal with out on the road and just automatic resetting if there are any problems.

Up here that’s just for our Travel Buddy. That’s a really cool little 12 Volt oven. I think anybody uses them for his pies and pockets and things but yeah, they’re really cool. Flick it on while you’re driving and you’ll probably notice now you’ll smell these canopies go past and they smell like a bakery, they’re awesome.

So, it just ticks away and that’s this lead. It’s the way that Norweld do it, which is a brilliant idea, it’s all on runners and movable. So, once he works out his set up in here he can mount it wherever and we’ve given him plenty of lead so, it can go down the back or up the front or whatever he wants to happen there.

DCDC charger pretty self-explanatory we’re also using this as a solar regulator. So, at the moment we’re putting 8.3 amps in from the solar panel out the front. I think it’s 150 or 160 watts panel we fitted there.

So, that’s going into this and also the alternator charge goes into this straight from here down to the DC down to the BTech battery. So, this really is the thing that does much of the work charging the battery while we’re on the road. We’ve also got an AC charger here with just a lead, if he does need to plug into 240V for any reason. So, he’s at a caravan park and it’s been cloudy for ages then this will just plug that in and that’ll charge the battery out.

That’s a 40 amp charger so, that’ll definitely do the job. Circuit breaker for, sorry, fuse, bussmann fuse for the inverter and down here is just the shunt and that just runs the ePro. So, everything from the battery pretty much goes through this and that’s how it monitors the current flow and gives you all your percentages and so on.

So, the lights were fitted, hardcore lights. I think we fit at the metre-y on the door and then the 50 centimetre one on the inside they’re dimmable and they’re dual colour. So, they’ll do the orange, insect-proof or low insect lights and also a bright white light for cooking and so on.

So, they’ve let me out now. So, I can show you the inverter 2000 watt inverter. So, this is switched on from the other side and basically what it does is give us output on both sides through these GPOs. Now, that’s been the fact that we got a 200 BTech lithium battery. We’ve got a 2000W inverter that’ll give us the ability to run microwaves, most coffee machines and inductive cooktops which is pretty much where everybody wants to go at the moment. So, that’s on both sides. So, it’s sort of gives them the flexibility to cook on both sides or obviously we could use this which I’d probably charging cordless tools things like that. So, yeah, useful on this side. We’ve also given him another output over here. Again, if you want to run a second fridge so, that’s quite possible we you can smack a second fridge here and then we’ve got USBs and cigarette socket output here so, you can charge your [devices] and so on from this side. So, very flexible pretty much you can work from both sides and whatever he sort of decides to stick in here he should have an outlet ready to go.

The next thing we’ve done is down in here. You probably not even gonna be able to see it. Down in here, we’ve got a TJM air compressor. So, that’s all wired up, tucked away in there quite neatly.

All right, so the front here obviously got a pretty cool look to it. So, the main thing we’ve fitted is we’ve got two of the Livid Hyper-Drive MK2. These things are awesome. Look great on a black bar and they’re one of the few lights we’ve found that actually fit on one of TJM and bars. They got a really shallow thing really shallow mount to them so, it’s hard to find something that mounts and these Hyper Drives look awesome.

Up there we’ve fitted one of the Steadi light bars with the daytime running lights. Again, looks perfect. It’s great up there. We’re using the Stedi mounts onto the Rhino backbone and it sits perfectly. And then on top of that, we’ve got the Enerdrive solar panel. I think it’s running 9 Amps at the moment so, happy days it’s really doing its job.

All right, so down the back here look the camera’s a bit of a compromise that’s not final. We’ll just run with that until we decide where we’re gonna mount it. I think he’s banged his head on the ladder a few times so, we might change something there. That’ll get us going and work out where it is. Cars only got 400 kilometres on it so, we’ll let the owner take it for a good run and decide what we wanna do with that camera.

Down here is obviously our towing setup. So, we’ve got stability control, charging lithium in the van, 12 pin plug and WOZA cable for the camera, Safety Dave camera on the van, and big Just Autos exhaust.

So, here we are inside the car.

There are a few things going on in here but most of it’s pretty well hidden. So, I’ll give you a rundown. First up, we’ve got the Safety Dave screen with the van he purchased came the screen that’s got a dual input. We might actually run a four input screen that breaks it up but we’ll run this at the moment. We’ve got one camera on the back of the canopy and then we’ve got the other one to that was laid down the back that we showed you. All you do to flick between the two cameras is just flick the V1, V2 button. And so, at all times you can check if you’ve got your van on the back. You can check the front of the van or without the van, you’ve got full vision. I don’t know if any of you have driven these things with a big canopy on the back but it’s pretty hard to see even with the MSA mirrors.

Moving along so, the UHF it’s got one of the new XRS ones so, we’re all using we’ve mounted the just a little switch blank down here like an RJ45 pass-through. So, that means when he’s not using it he doesn’t have to put up with it. He can just unclip it. We’ll clip it in and away you go.

So, if you wanna watch any of our other videos on canopy installs check out this playlist. YouTube wants you to watch this one down here and if you’ve got any comments put them below. 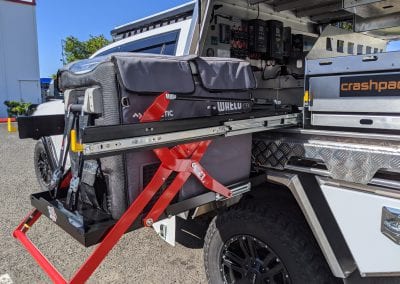 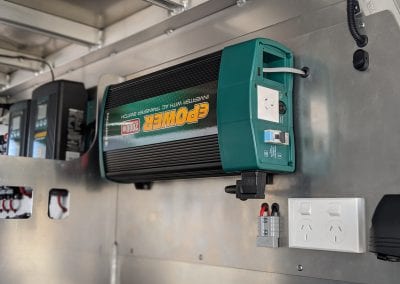 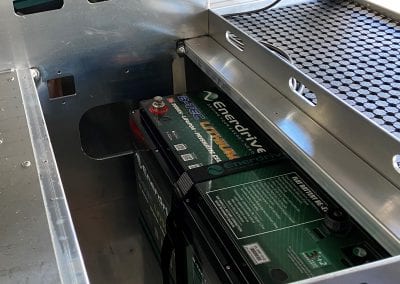 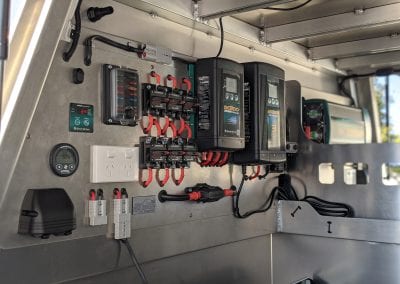 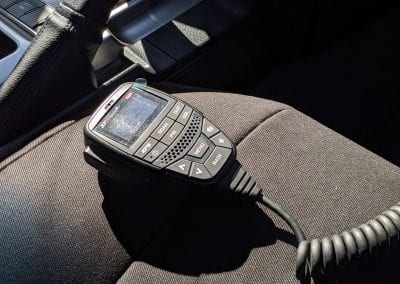 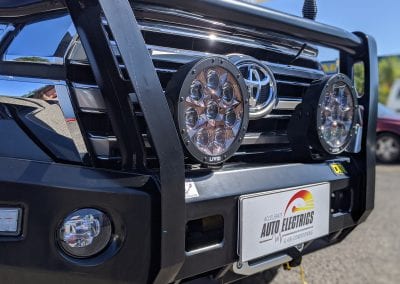 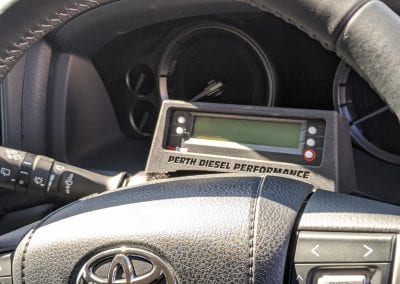 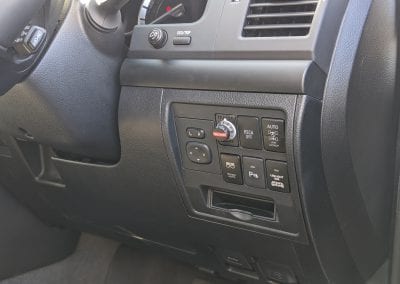 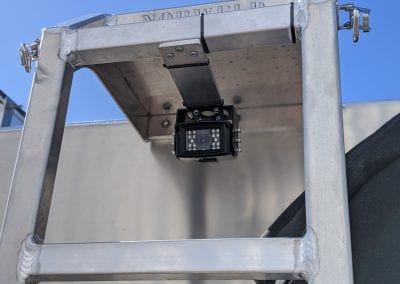 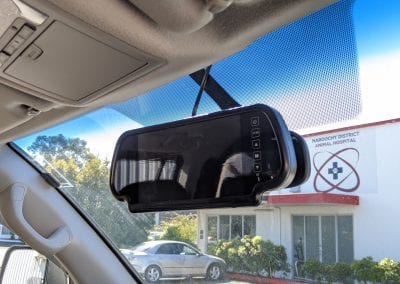 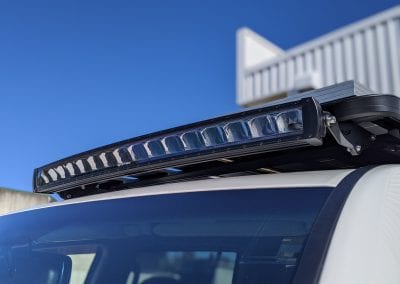 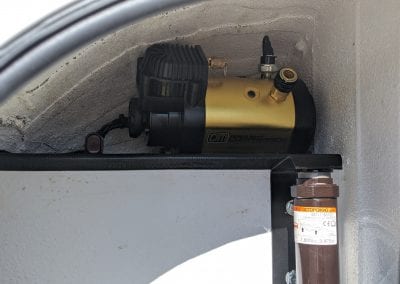 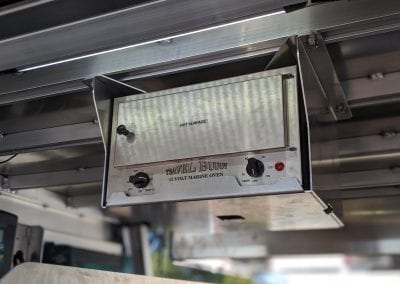 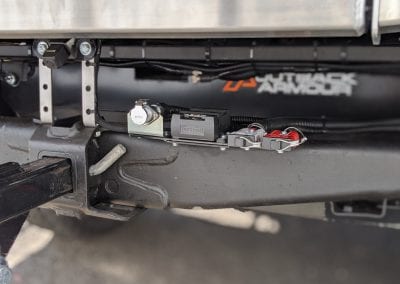